I wanted to just leave the room, but hey. Instead I was… announced out? There’s just no way to describe how I was marched to the door with a hand on my shoulder, and the door was dramatically flung open so it slammed upon the opposite wall and all. The vampires who were standing around the door jumped and spun.

Bella lifted her chin at them like she was the most important thing in the world. No, she radiated it. Then, she crooned. “Namastay,” while designating me with the tips of her fingers as if I was a crystal ball that shouldn’t be touched. “Put our guest up for the night. Find her some clothes and -” she seemed to lose track of her own thoughts. “All that,” she finished, eyes drifting off to the ceiling.

The vampires bowed, echoing ‘namastay’. I took a breath and looked over my shoulder at Bella. She had a smile on (did she ever not smile?) and was obviously in dreamland.

The vampires remained in their bow. They were waiting for something. I wondered what the hell was going on.

“I have had a vision,” whispered Bella, entranced.

“Yes,” said the beefcake, looking up but remaining in his bow.

“I-,” Bella brought her fingertips to her forehead dramatically. “I-,” and she froze in that position.

“Need help?” I asked dryly, hoping she would end with the dramatics. But she didn’t answer. Everyone else glared at me.

Bella began breathing deeply. “I see,” she crooned, swaying back and forth on her feet. “I see-” and she opened her eyes. Her strange smile returned. “Have a good night, everyone.” She patted me on the shoulder. “Don’t get into mischief.”

And with a clap, she shut her door. The vampires rose from their bows. I looked from the shut door to them. Gingerly, I pointed a thumb over my shoulder at the door. “Is she always like that?”

“Our Queen has been gifted with visionary powers unlike any other,” intoned my beefcake. “Don’t make light of them.” Or we’ll beat you to a pulp.

I nodded, stuffing my hands in my pockets. “Oh,” as if I hadn’t already understood that.

Beefcake clapped a heavy hand on my shoulder, then another. “This way,” he grunted, physically maneouvering me towards the stairs. I let him, grinding my teeth at the treatment.

Downstairs, Mark and Leo were waiting nervously. I could see why. The other vampires were surrounding them, sharpening their knives, hungry eyes fairly devouring my friends.

“They’re to be put up for the night,” grunted the beefcake in charge. I was shoved to the center of the waiting room beside Leo. “Find them rooms.”

Groaning, various vampires pulled out cellphones and began texting. Those that had accompanied me upstairs just stood there and glared imposingly at me. I put my hands in my pockets and looked around at the décor.

After a moment of doing that, I cleared my throat. “So,” I turned to Mr beefymcbeef. “Bella-”

“Our Queen,” he intoned. “Is not to be called by her name alone. Show some respect.”

“Oh, yes, no disrespect intended,” wouldn’t want to insult the nutbag. “Uhm,” I tried to formulate my words into a proper question, but all that came to mind was ‘Twilight? Really?’. So I blurted out whatever came next to mind. “Where’s she from?”

There was a universal snort, even from the ones on the cellphones. Mr Beefcake glared at me.

I waited a moment before admitting that they weren’t going to answer. “Why?” I asked loudly. “Is she some sort of secret?”

“We don’t discuss our Queen with strangers,” one on a cellphone said loudly, only to be shushed by others.

“They’re not worth it,” muttered another.

I flopped down onto an armrest beside a vampire. She hissed at me, baring her fangs. I hissed back. That baffled her.

“Found one for the kid,” said a scrawny vampire, handing the cellphone to my beef-in-charge.

“Good,” the beef took the cellphone, then handed it back. Nodding at me he said “This way.”

We paused for him to put his coat on, and then we trooped out into the snow. It was a full-on snowstorm now, snow flurries whacking me in the face and making me blink uncontrollably. I could barely see a thing, and felt stupid as I trudged along behind the hulking vampire.

I was taken to a neighboring building where a quaint-looking family greeted us with very toothy smiles, all vampires, even the little toddler in their arms.

“So pleased to be of service to our Queen,” they cooed as we were let in.

Mumble mumble, went the beefcake, taking the mother aside and muttering something to her. I was led by the father to a guest’s room.

It was all very quaint. Nicely painted, with ruffles and ribbons on things. Barf.

Then, as I was looking at the ruffles and ribbons all around this room, the door was drawn shut behind me.

I stayed in that room all night, sleeping lightly and generally being frustrated. There was no window to escape from, and I didn’t want to just bust out and get caught sneaking around. What was I going to find in this house anyways?

The next morning, at no particular time that I could decipher, I was woken up by the mother.

“Darling,” she cooed as she pushed the door open. “It’s time to wake up.”

I sat up grudgingly. I was no one’s darling! I was about to give her a mouthful of my opinion when I saw that she was carrying clothes for me. Fresh clothes!

Mercifully, they weren’t pink and purple or something hideous like that. No, they were black with … ‘visitor’ spray painted on it in white. Really? Really?

I put the t-shirt on, thinking that, really, it couldn’t have gotten any cornier. The cargo pants fit as well with a belt and mercifully they didn’t have ‘visitor’ spray painted on the ass or something dumb like that.

Trudging out of the room, I was greeted with – Bella herself standing there with a troupe of vampires. The family that had ‘hosted’ me looked ecstatic out of their minds, starry eyes staring adoringly at Bella. Bella who turned her smile to me.

I glanced to a window and saw that it was still dark out. “Morning?” I guessed?

“We need to get a start on your day if you’re to see everything,” Bella crooned as she waved me over. “Hurry, hurry, we haven’t got all day.”

Frowning, I let myself be ushered out the door into the cold and dark – with Mark’s coat on. Fuck, no one was ushering me out without a coat on. Not in this cold.

This post is a shameless excuse to just pour my mind out there, and especially to share a quick (only 2 hours lol) sketch I did of a character. 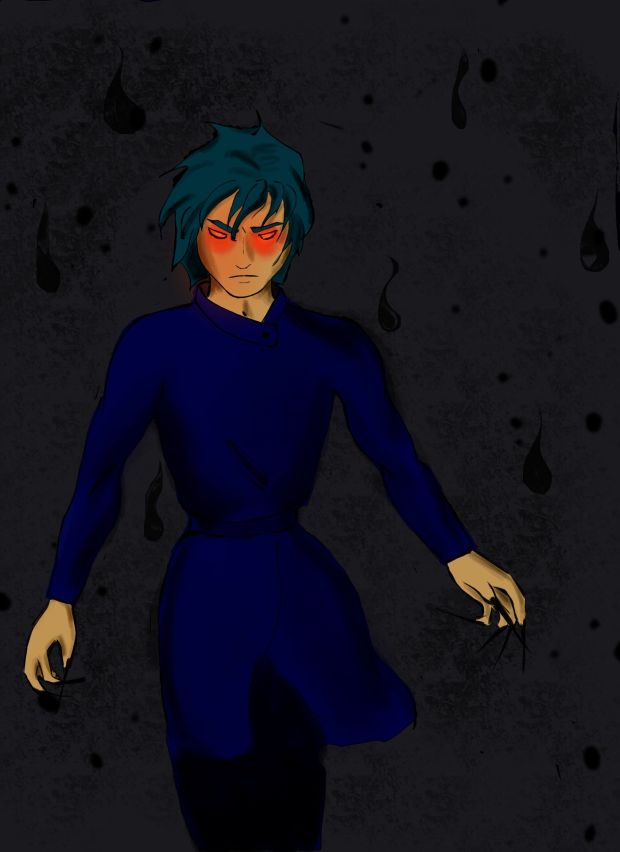 I’m never going to say my art is amazing. I do it mainly because it’s fun and it helps me think and sort out a story. But another thing I do to sort out a story is to talk about it, and while talking last time to a dear person, I received a not-quite-eyeroll when I mentioned that this character, due to their identity in the dream, was transgender.

Excuse me? An eyeroll? At me?

Alright, you can eyeroll at some of my more ridiculous ideas. But that my characters are trans? Why? I mean, if someone was to do like Bridget Essex and launch themselves into lesbian novels, what’s the problem? Why can’t I do transgender novels? Aren’t we supposed to write about what we know best?

Here’s why not: transgender people are ‘too bizarre’ for the average person to be able to relate. They’re also such a minority that it’s ‘ridiculous’ to have them constantly be in your stories as main characters.

Well hmph to that idea. I’mma do what I want, but I resent the fact that this idea is out there. I resent that transgenders, because we are a minority, because we are disruptive of the gender norms, we are seen as ‘too much’ for the average person to be able to digest.  I don’t think any kind of person’s existence should be ‘too much’ to be highlighted. For crying out loud, we talk a whole lot about shark deaths, and aren’t transgender people more common?!

On a final note, isn’t it time we discuss transgender folk? We’ve always been here, accepted and given specific roles in so many cultures and places! When is it going to be ‘the right time’ to have a transgender character? When will we be ‘palatable enough’? 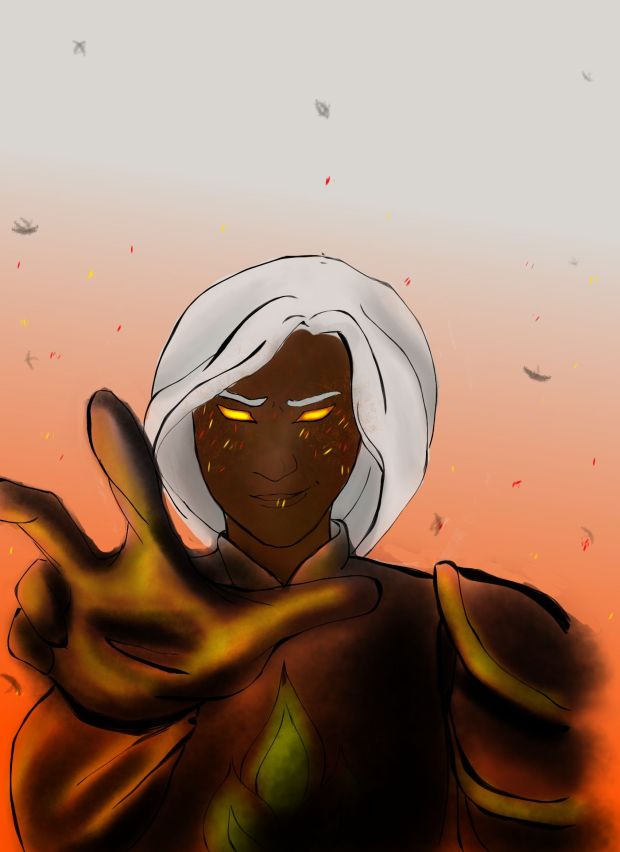 I don’t want to get ahead of my story here, as I’m not sure if they’ve featured in what I’ve shared on this blog yet, but I finally drew a picture of them that I like! I’m so excited that  had to share it!

This character, also known as ‘The Great One’ is the baddest of all the badasses in Farfadel. They totally kick butt. And I don’t like them because of their power, but because of how they grow with their power. They learn to tear down their own blockages and move on, growing ever more.

Which is probably why I’ve made ‘The Great One’ a recurring character in many of my Farfadel novels. Considering that I’m sitting on a total of four unfinished Farfadel  novels, that’s a lot of echoing for one character. But hey- they deserve it!

Now I’m not telling you who they are… I’m going to let you stew on that mystery for a moment or two. But suffice to know that they’re an important character. If you can guess who the character is, you uh, get a virtual cookie? Let me know what you think!

Farfa-What? Farfadel, ladies and gentlemen. It is a land of wondrous beauty, a land of happiness and joy. It is a place that, in the depths of my own despair, I concocted up.

Yep, a few years ago I was in the worst stretch of my mental health. Determined to keep writing, I concocted Farfadel. A happy, fearless, and harmless world where nothing bad happens and shenanigans abound. It was meant to be readable for all, a gentle balm for those suffering from anxiety and depression, for I was at the point that I couldn’t read anymore because the anxiety was so bad.

So what about it? Well, like so many good creative things, it has become an addiction of sorts. One novel spawned another, and another, and another. Two are finished, and many, many, more unfinished. I love writing Farfadel, I love the harmlessness of it, the joy and freedom for silliness.

But what does this have to do with you? Well, dear readers, I need your input. You see, I lose motivation swiftly. I feel like none of this matters to anyone but myself. So I would love if you would read some of my stories and share your thoughts with me. I will share as much as I can for FREEEEE (I love free stuff), and will sell others. For the moment though, I would really just love input and feedback. What do you like? What made you laugh? Did I misspell something? Share with me!

For now, the novel will be published on this website, under the heading ‘Of Adelaide and Shadow (A Tentative Title)’, or you can follow this link HERE to find it.